is a box (which may once have been a package containing cans of alcohol!), now plastered with random cute/obscene images, and which people are encouraged to fill with scraps of paper soaked through with secrets: those things we don’t normally disclose or discuss; things we did, or didn’t do, which now give us guilt or some sense of shame; things that, in the Confession Box, we can share, safely, anonymously, but which are released, by being read out by the Box facilitator (me) and even turned into a poem….

The Confession Box made its debut at the Made in Roath Festival in Cardiff. Most recently, it appeared as part of the ‘Secret Confessions of…’ event at JW3 in London. Food and fibs featured largely in the confessions collated at this event… I was able (i.e. had time) to create a poem from a selection of the many secrets slipped into the box before being hung, like bunting, behind the performance area – where I read out some confessions interspersed with my own poems, while some fearless audience members were brave enough to share secrets, live at the mic… 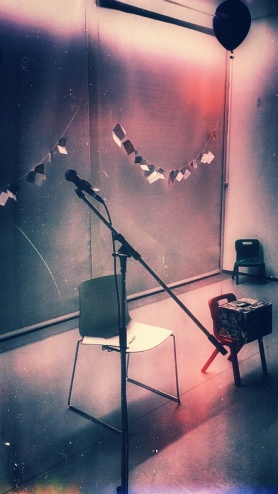 And here is the poem, put together from the confessions themselves…. Enjoy! x

I eat my own toenails

I pretend I am pure

I eat all the biscuits

My husband is a bore

Before sleep, I make wishes

I stole a dolly from my school

I am selfish, I lie

I justify all I do

I’m jealous of my best friend

I stole a Mars Bar too

I’m worried that my partner

I didn’t pay for this event

I kicked my little brother

I destroyed a Christmas manger display

I stood up a blind date

I’m afraid of being locked up

I hate my sister’s dog

I wear red trousers a lot

I bought a plastic vagina

I have friends I don’t want to see

I’m in a weird mood today

My boyfriend is much older

I was sick in my hair on the bus

I am fallible, I am gullible